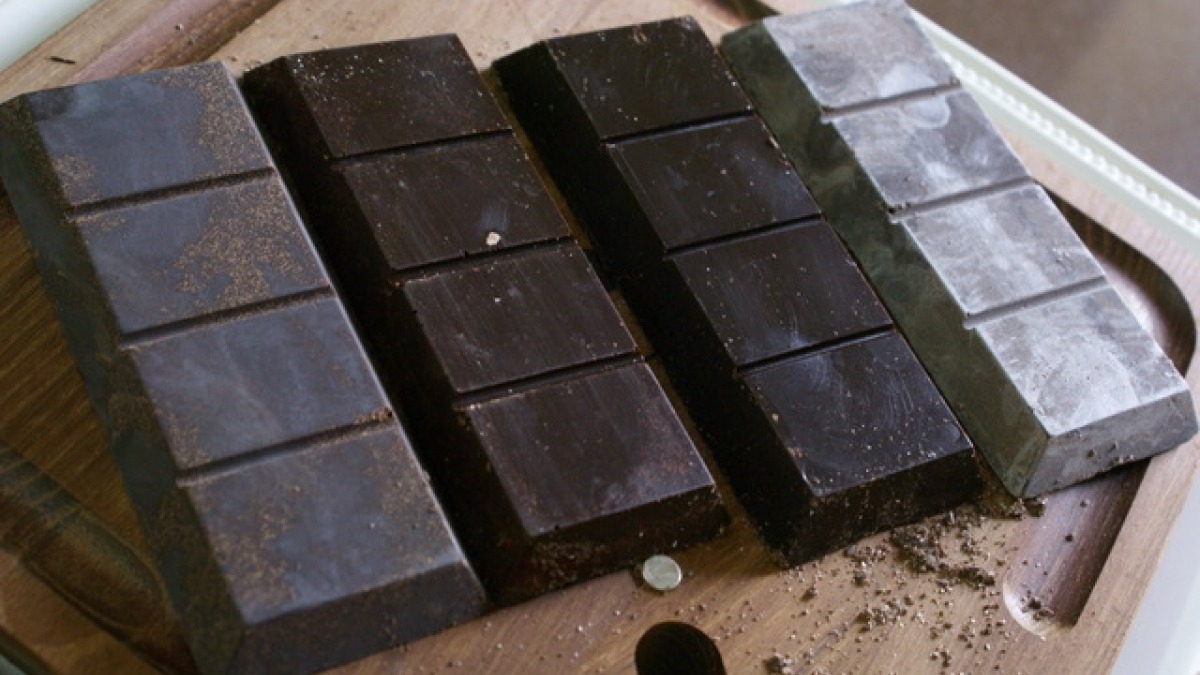 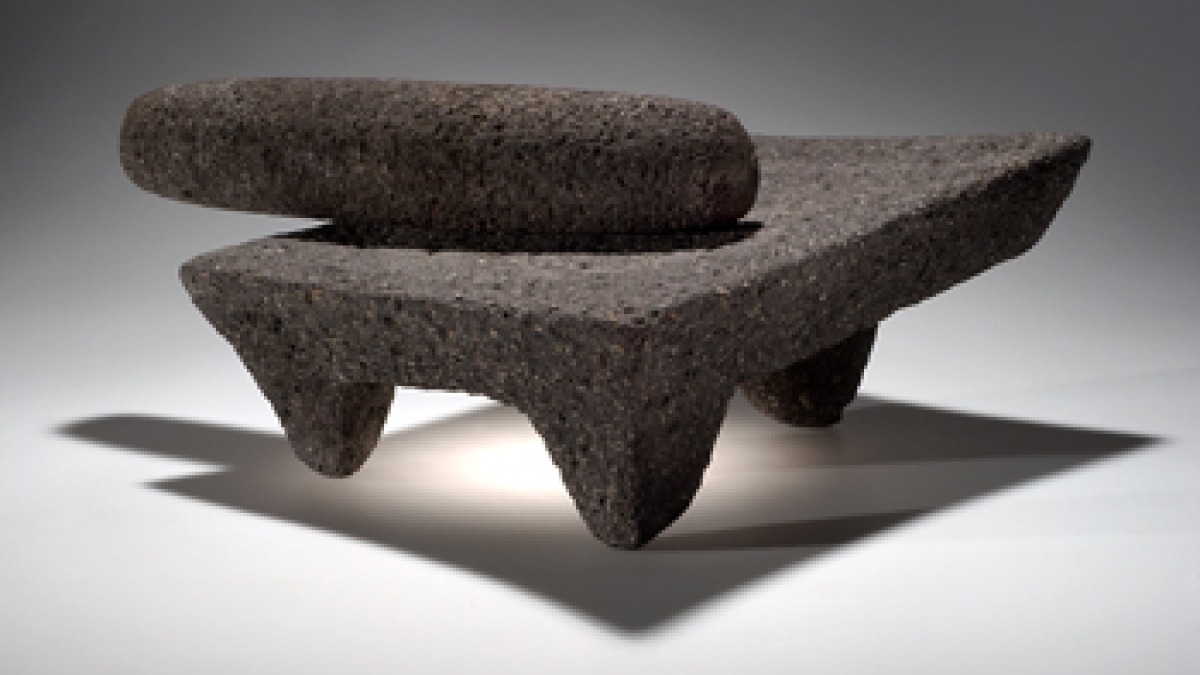 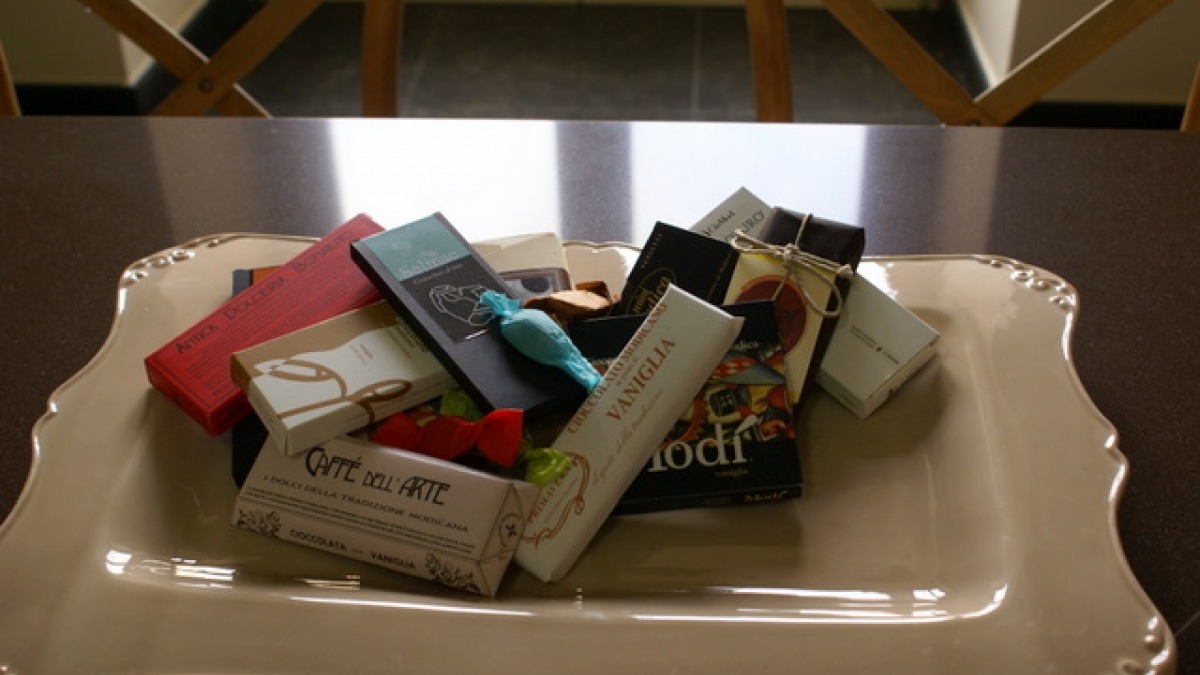 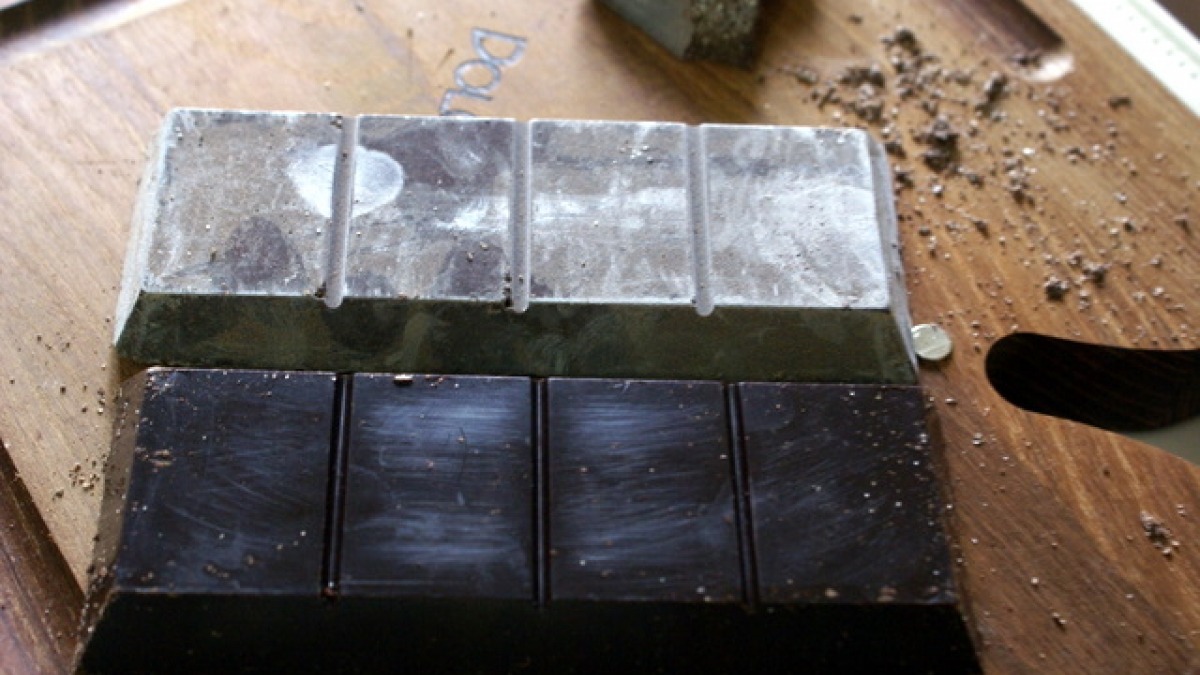 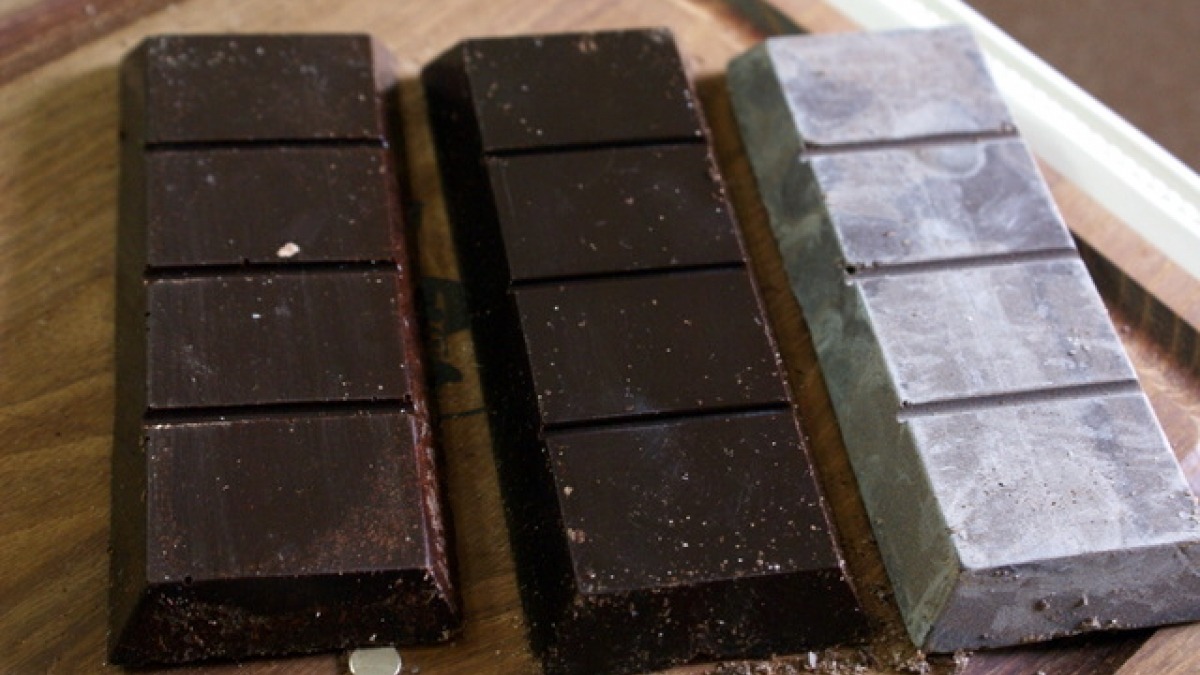 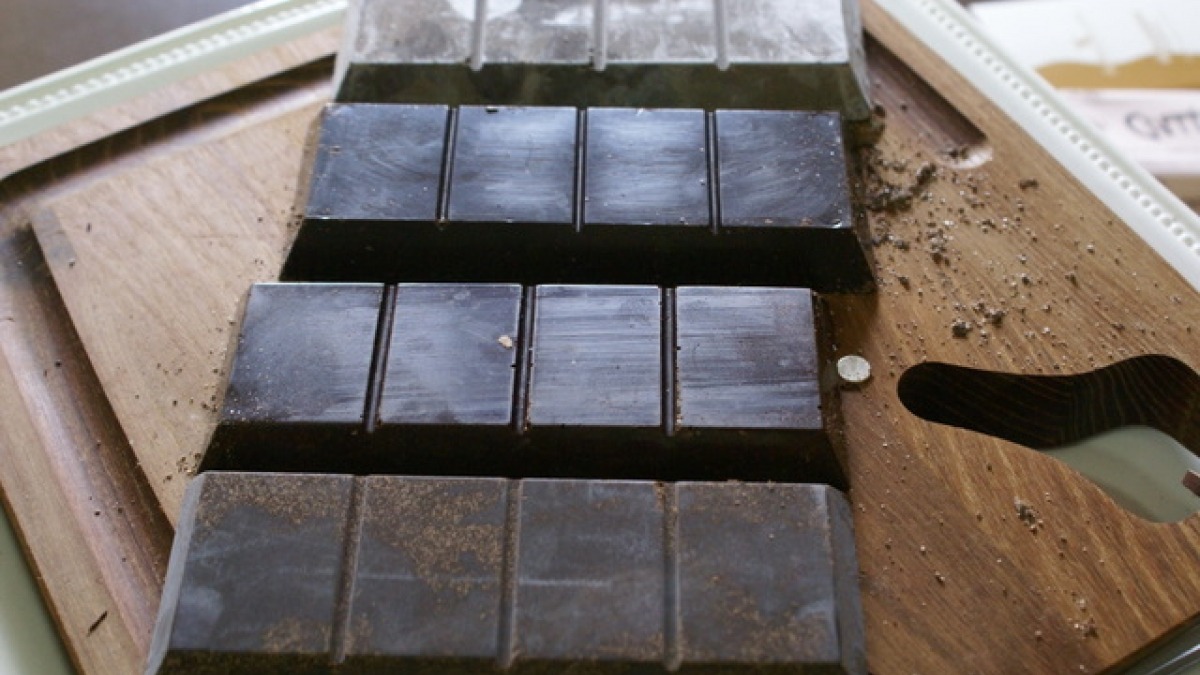 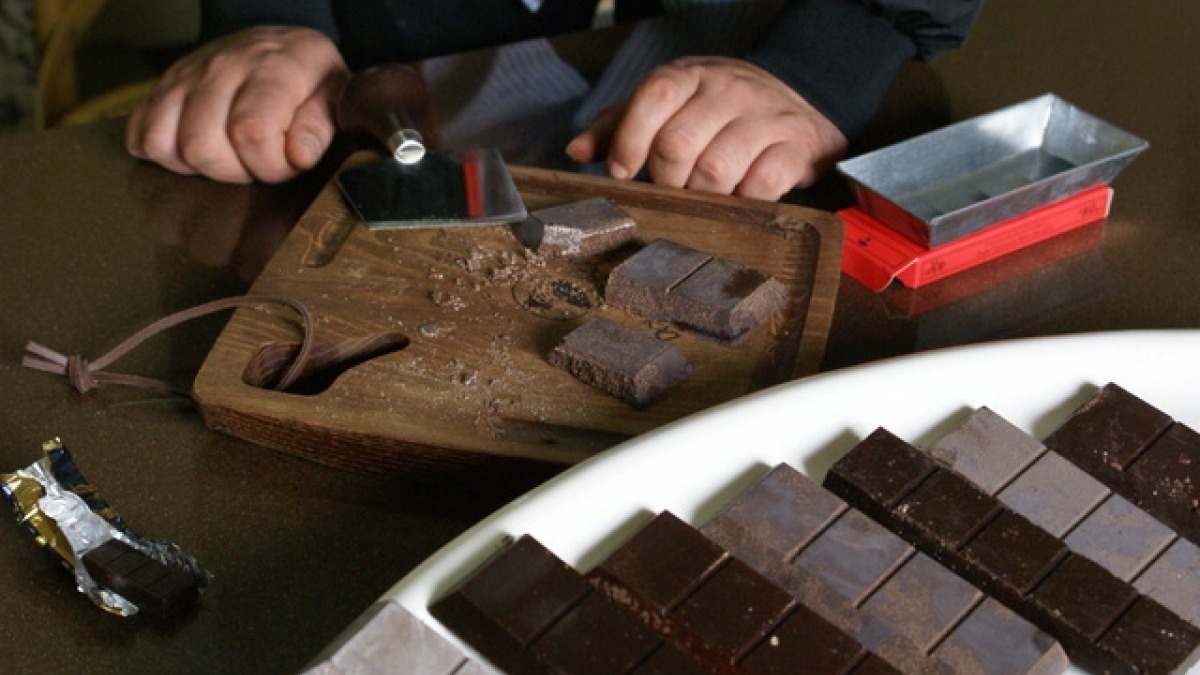 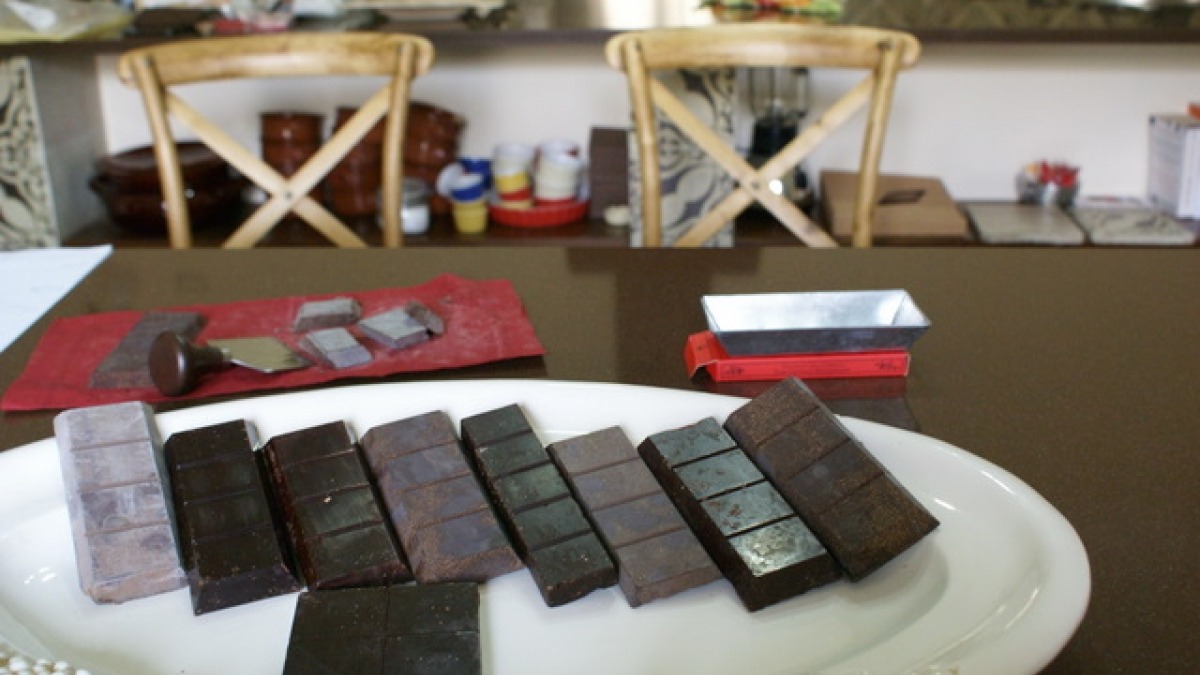 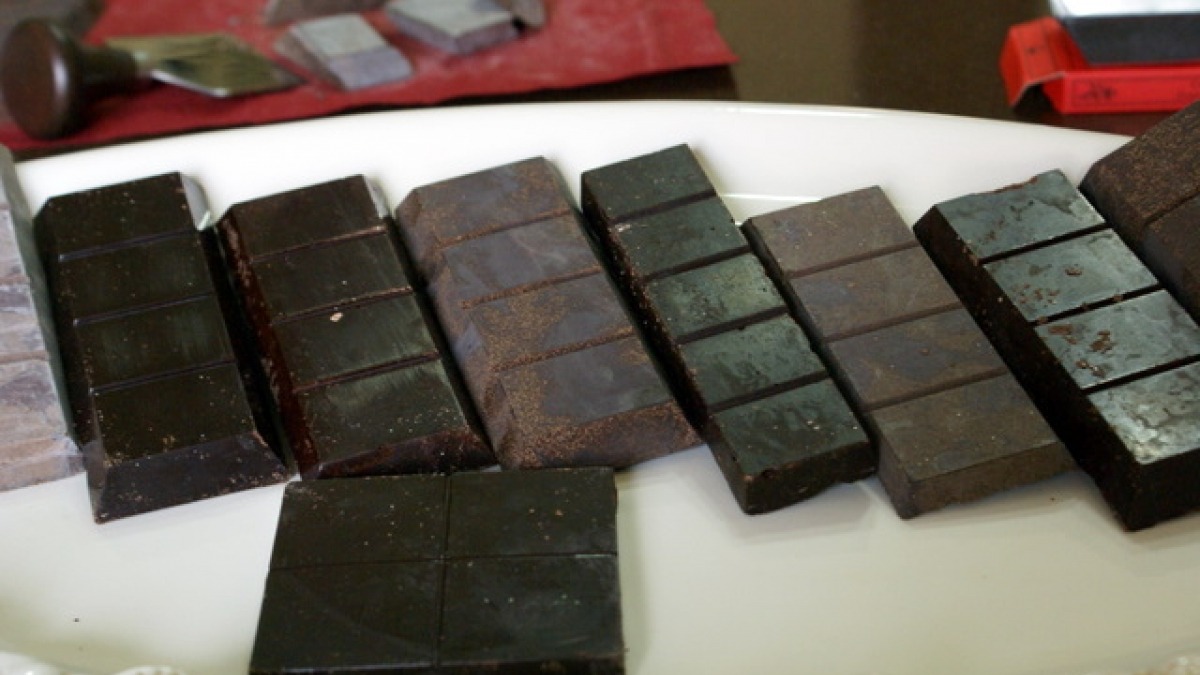 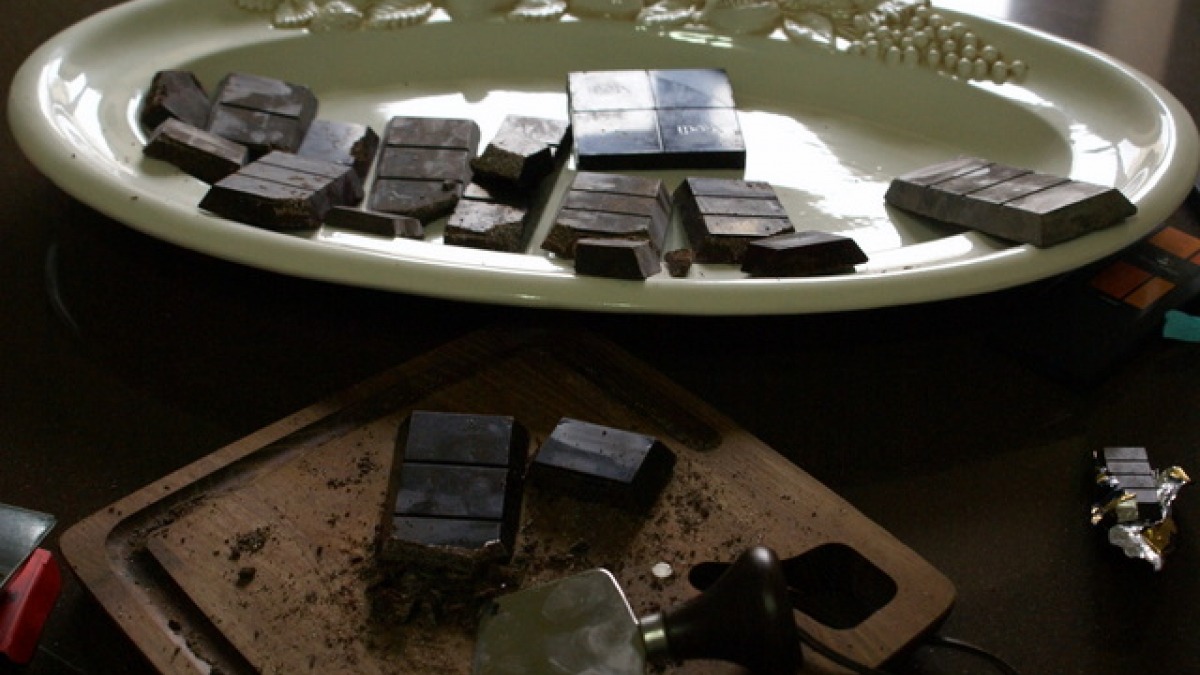 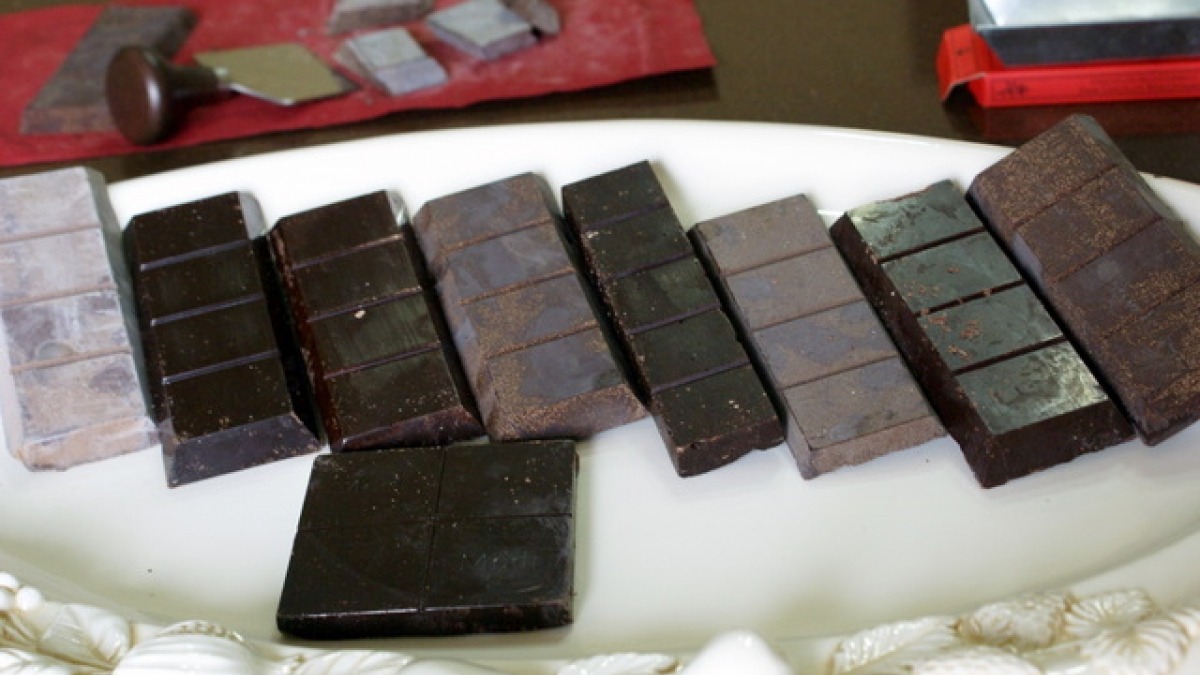 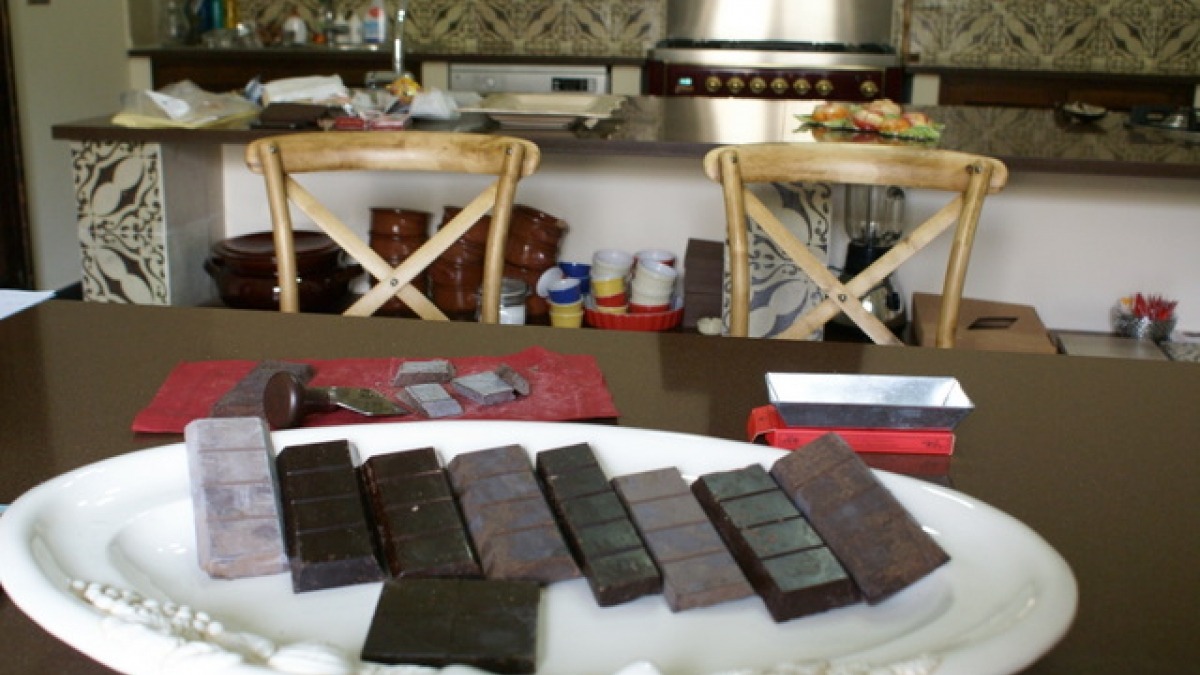 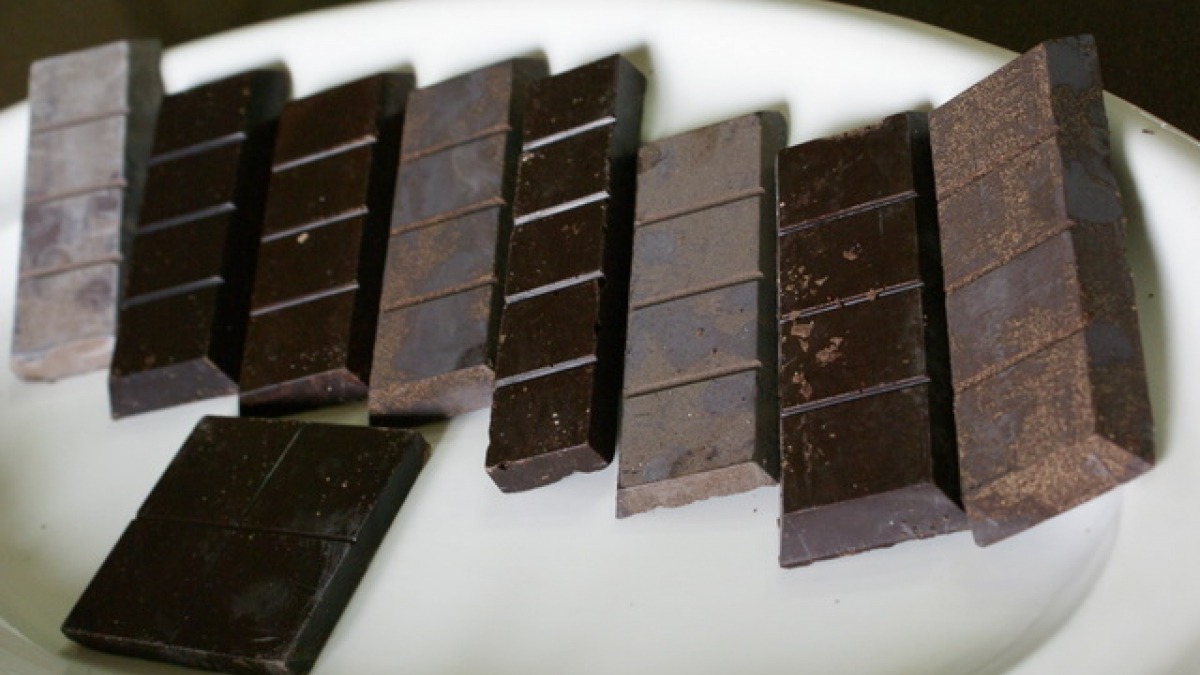 Modica's culinary heritage has always impressed me, the city offers such a variety of products and recipes which are classic of Sicilian and South-Eastern Sicilian cuisine and special ones which belong just to Modica's food history and tradition like: cioccolato, 'mpanatigghi and liccumie. Chocolate, in particular, has contributed to making Modica famous all over the world.

Modica chocolate is still made using the original technique brought by the spaniards in the 16th century, so you get chocolate that is made straight from cacao beans, with no added cocoa butter, soy lecithin or other food additives.

One step of the old traditional process required working the cocoa on the Mexican metate, a lava stone slab with a stone rolling pin, to melt roasted cocoa on a fire at low temperature, never going over 40 degrees Celsius. The metate is not in use any longer, but cocoa is still worked at low temperature so that the sugar mixed in does not melt, giving the grainy texture this chocolate is famous for.

One interesting point about Modica chocolate is that it is simply a recipe, a cooking method, as both cocoa and sugar are imported. This is why the efforts to get an IGP or other sort of recognition linked to the terroir have so far ended in failure. So in theory, anywhere in the world you can make Modica chocolate following the traditional method. But can you really? Is it that easy? Do experience and tradition count for nothing? And is all the chocolate branded as "Modica chocolate" the real thing?

Last week, I met with a friend of mine who is a chocolate expert to evaluate a selection of Modica branded chocolate bars and try to come up with a guide to help consumers to select the real thing and, perhaps, find some answers to the above questions.

With a couple of exception, we decided to focus on one type only, the traditional Vanilla flavoured chocolate and evaluate the following elements: label information, look, smell, taste and consistency.

The label should only list three ingredients: cocoa, sugar and, if used, spices. No cocoa butter, vegetable fat or other extra ingredients should be mentioned.

Some producer use 50% cocoa and 50% sugar, for others the proportion are instead 60% and 40% respectively. Spices represent a really small, almost irrelevant percentage.

Modica's chocolate should be dark brown and its surface might appear mottled and matte due to cocoa butter blooming. As the cocoa used to make this chocolate does not go through conching or tempering, this is absolutely normal and not an indication of bad storage or bad tempering as in other kinds of chocolate.

When you cut a piece of chocolate, the broken section should show shiny white sugar crustals, especially in the top part of the cut.

In our selection we found that many bars had a good dark brown colour and presented various degrees of cocoa butter blooming within the norm. However, others looked completely outside any acceptable standards, presenting a grey surface with grey/white spots (see pictures), and stained any surfaces they touched. This is probably due to over heating cocoa in combination with no tempering. Basically, the cocoa and its natural content of butter were "burnt".

Modica's chocolate should smell of cocoa and whatever spice has been incorporated.

Some of the bars we considered had a good smell of cocoa and vanilla. Others had no smell what so ever, this is an indication that probably industrial cocoa mass, with little flavour and personality, was used by the producers.

Some bars were actually smelling like rubber. There could be two explanations for this: all the bars that had this smell were preserved in plastic sealed bags rather than the traditional waxed paper. However, while some just had a hint of rubber smell which vanished after a couple of minutes, others really stank. These were also the very grey/whitish chocolate bars we already talked about. This might be due to over-heating cocoa, probably turning it into liquid form (not following the traditional method) to let it go through industrial machinery which might have rubber parts. This would explain both the strange look and smell.

Is it too banal to say that it should taste like good quality cocoa? Well, it does sound obvious, but the fact that in the process cocoa is not conched at high temperature, implies that many nuances and flavours are preserved, offering a more complex multi-facet aroma than other kinds of chocolate, with a hint of either cinnamon, vanilla, chilly or other spices.

When tasting the various Modica chocolate bars we had purchased (I know what you are thinking, what a difficult job;)!), we confirmed the obvious: look and smell play an important role. The bars that followed the look and smell standards tasted great, with some more pleasant than others. The bars that looked and smelt funny, also tasted funny. Some were seriously nasty. This broke my heart as most of these bars were actually produced in Sicily. The bars with no particular smell were almost tasteless.

High-quality conventional chocolate should usually make a distinctive, crisp, snap when broken, shattering cleanly. Modica's chocolate cannot easily snap under your fingers, this is why we usually use a knife to chop it. It should also crumble easily as it is often ground to make hot cups of thick melted chocolate.

While conventional chocolate should start to melt when you hold it in your hand for a few seconds (they say the quicker the better, as this indicates a high cocoa butter content), Modica's chocolate does not melt that easily as there is no extra cocoa butter added to it. This also means that a bar maintains its hard solid consistency even in hot climates. You can have a look at an old post of mine where I talk more in details about this here.

When you bite into a piece of Modica chocolate, you get the grainy texture of sugar crustals and the bitterness of cocoa at first, then the two ingredients start melting in your mouth and turn into pure pleasure.

First of all, when buying Modica's chocolate try to be critical and look for all the features listed above to make sure you are getting the real thing. Look for a dark brown colour, do not mind cocoa butter blooming as this is normal. Look for a rich, inviting smell and taste of cocoa, let your tongue blend sugar and cocoa into enjoyable pleasure and...........you are in Modica!

Considering the many disappointing chocolate bars branded as "Modica chocolate" we tried, it seems that, after all, making this special type of chocolate is not that easy or that obvious at all. The best quality chocolate bars we tried were made by some of the most renown small "dolcerie" and "pasticcerie" around Modica, with decades and decades of experience in making chocolate.

The good news is that if producers lack the required experience or try getting shortcuts to lower the costs, it shows immediately in their chocolate bars. This is why I firmly believe that the best recognition Modica's chocolate can get is an "ECQA label", that is Educated Consumers Quality Award ;).

Written on
June 4, 2010
Filled under
Traditions, Food and Drink, About loveSicily