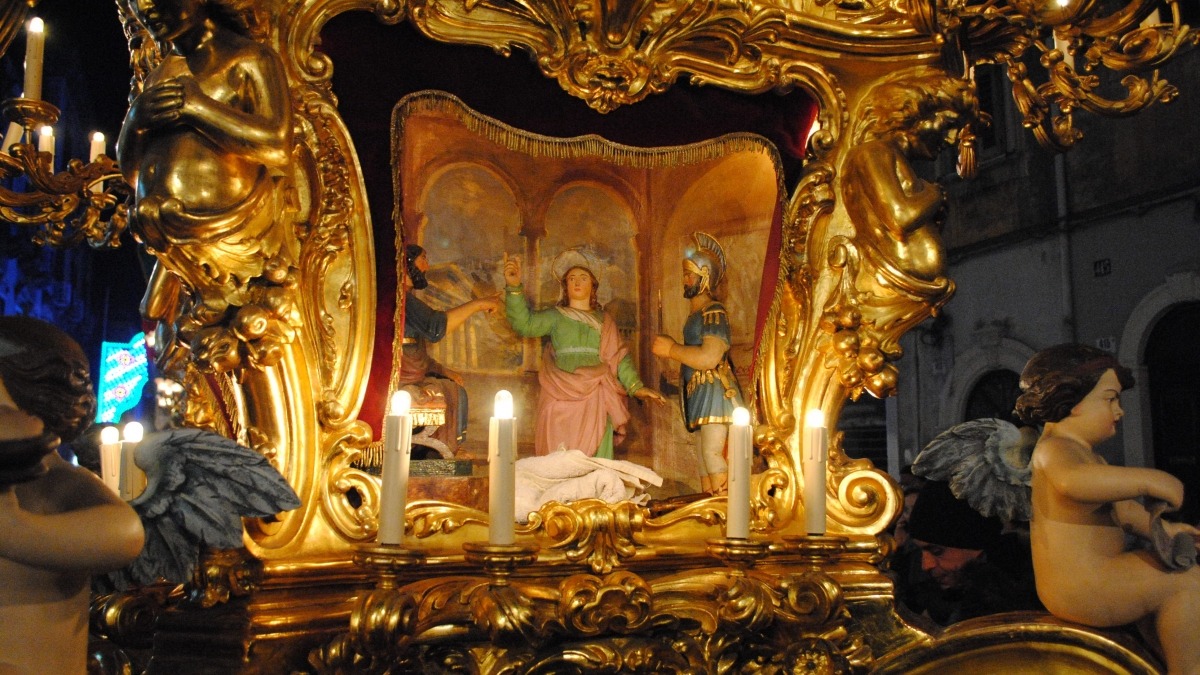 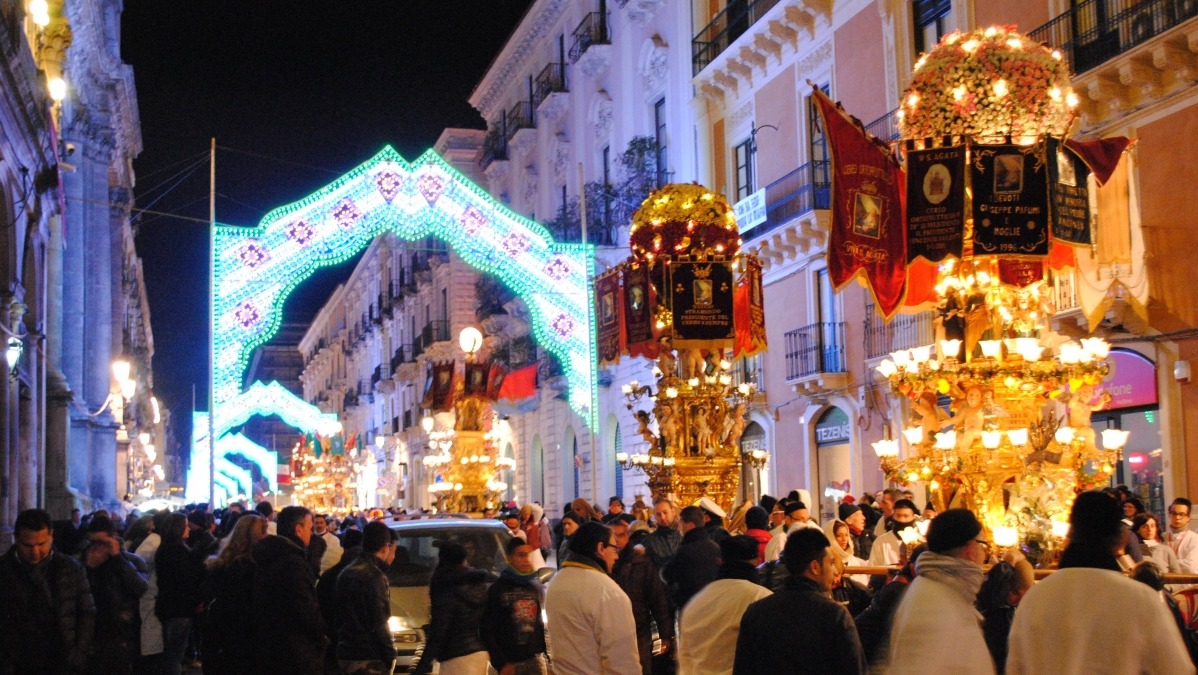 Sant' Agata is Catania's patron saint and is celebrated in February from the 3rd to the 5th with one of the largest religious processions in Italy.

Agata lived during the third century AD, when Sicily was under the Roman Empire, and was the daughter of an important rich local family. She was very religious and, while still very young, decided to dedicate her life to God by resisting any men who wanted her at a turbulent time in Sicily, when Christians were prosecuted.

She became a martyr when she refused the advances of Roman proconsul Quintian.
With his pride offended, and taking advantage of the persecution rules he had her arrested and brought before himself to be judged. He thought that when faced with torture and possible death she would give in, but Agata refused to abandon her faith not even after being imprisoned in a brothel, then sent to prison and tortured in the attempt to change her mind. In the end, Quintian sent her to the stake on the 5th of February 251AD.

People in Catania are particularly devoted to Saint Agatha. When the city is threatened by a possible eruption of the volcano Etna, they take the relics of Saint Agatha on the mountain in a procession asking for a miracle to stop the lava flow. She is also considered a protector against the outbreak of fire.

It is no wonder then that the city of Catania, at the foothills of Europe's largests volcano dedicate their most important religious festivity outside of Easter and Christmas to Sant' Agata.

The procession begins on the 4th of February. At dawn, after a special mass, the St. Agatha statue, which houses her relics, is placed on the fercolo, a silver carriage and pulled up the steep Via Sangiuliano by around 5,000 men.

The huge festival lasts for two days and two nights during which the procession goes around various areas of the city. Over this period more than a million people will flock to the streets to follow the effigy of St. Agatha through town. Many of them carry gigantic heavy candlesticks, some of which are wonderfully decorated. The procession of candle-bearers, called candelore, parades through the city, usually accompanied by the church officials and the mayor with his entourage in gilded horse-drawn carriages. There is also a huge fireworks display at the end and you can buy sweets based on centuries-old recipes from nunneries which are sold around town for the occasion.

Because one of the tortures Saint Agata supposedly suffered was to have her breasts cut off, she was often depicted carrying her breasts on a plate. This episode of her life is also symbolized in pastries shaped like breasts called Minni di Sant Aita (Saint Agataâ€™s breasts). These are small round pastries with a white icing and a candied cherry on top. According to expert Reginaldo Grasso, there are two versions of them: both have an outer layer of short pastry but one is filled with pastry cream, covered in pink icing and topped with a candied cherry, while the other is filled with sweet ricotta cheese and has a white icing and a bit of chocolate on the top. Another traditional sweet are the Olivette, small olives, prepared with green marzipan, a reference to another episode of the life of the saint, when she initially left Catania fleeing the soldiers sent to capture her and managed to fid herself thank to an olive tree that was near the shelter.

For anyone wanting to experience a Catania that has not changed in centuries and witness how religious fervour still exists in a modern Europe the festival of Sant'Agata is a unique opportunity.