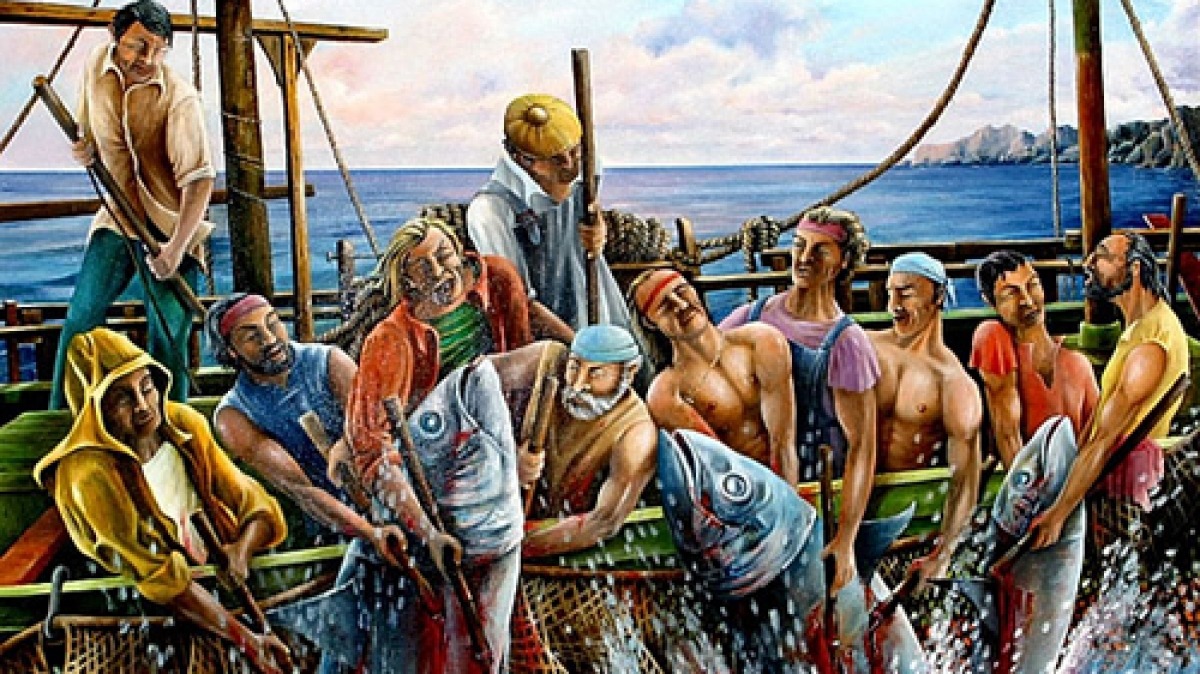 Few more days and I will be in Sicily! But, as my mother reminded me, I will have missed the tuna season. Every year at the end of springtime tunas migrate from the Atlantic ocean to the warmer Mediterranean waters. The "mattanza", the ancient ritual of the giant blue fin tuna harvest takes place from the beginning of May until June, and since even modern fishing techniques follow the season, getting there in mid-July is really too late.

The term "mattanza" (the slaughter) comes from the Spanish word "matar" meaning "to kill" and refers to a hundred years old traditional tuna-fishing technique. Tuna are guided into the tonnara which is a sophisticated trap system of successive nets which are gradually restricted in size and raised toward the surface.

The tonnara's two kilometers-long wings guide the tuna to the entrance of the first chamber, which is approximately 50 meters square. Then, a series of six successive chambers, each divided by a net gate, leads to the final chamber, la camera della morte, "the chamber of death", which has a net floor that can be raised, bringing all the tuna within to the water's surface.

There the fish are attacked and then hauled aboard boats with steel hooks snagged into their backs.

Unfortunately, the tradition is now dying. Today, few remaining traditional mattanzas take place off the island's western point among the Egadi Islands. The small island of Favignana and the fishing village of Bonagia, near Trapani, normally, attract tourists and gourmets.

As time passes, the tuna are diminishing in size and numbers, while demand increases in world markets and modern fishing techniques are more profitable. Moreover, as La Repubblica said the blame lay also with Japanese factory ships which scoop up everything out of the sea using sonars and work 24 hours a day in shifts. This spring, the brother of a friend of mine, who is a pilot, has worked in Ragusa for a Japanese company to fly over the sea and locate the tunas for the ships to go and fish them out. So when you eat tuna sushi, do not only think about the exotic orient, but also about the Mediterranean, its history, its tradition, its culture.

As for us, my mother has decided that we could not possibly miss to try out an old recipe for "ragu di tonno" from a book of old Sicilian recipes that she has experimented with this year. So she has bought some and she is going to freeze. It is not going to be exactly the same as fresh, but we can have an idea.

Written on
July 9, 2004
Filled under
Traditions, Food and Drink