Melting the cocoa at low temperature

Adding the sugar and spices

Placing it in the molds

Modica chocolate ready to serve
A cooking class for chocolate lovers wishing to think outside the (chocolate) box! 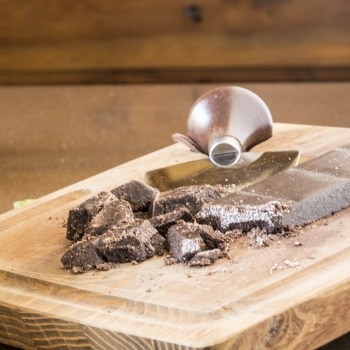 What you will learn

You will learn the ancient method to make Modica's famous chocolate and its interesting history, then prepare a chocolate-based three course meal. 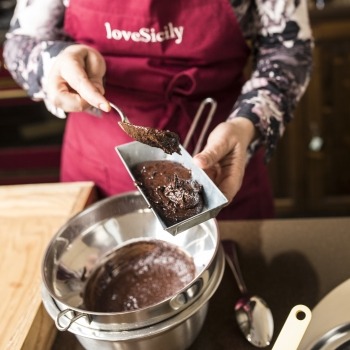 How you will learn it

Katia will show you the way her grandmother made it using her old tools. 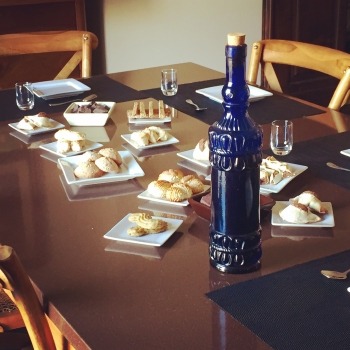 You will try different flavours and enjoy it melt in a cup of hot chocolate or as a gelato accompanied by other sweets.

All classes are taught in English and/or Italian, and start with a short introduction to Modica's chocolate history and tradition.

The hands-on lessons last about 3 hours with a small break in the middle to sit down and relax outside on the terrace overlooking San Giorgio with a drink of wine or coffee.

At the end of the session, we sit down and enjoy our meal paired to Sicilian wine, enjoying the breathtaking view of Modica's Saint George cathedral.

Modica's chocolate is one of the most famous products of  Southeast Sicily. It is still made the same way the ancient Aztecs made chocolate in Mexico and its tradition dates back to the 16th century. The technique was brought over by the Spaniards who in turn learned about it in what is now Mexico.

Modica, along with all of southern Italy, was under Spanish rule at the time when the Spanish discovered the New World and, consequently, introduced to Europe products they found in the Americas, like sweet and chili peppers, potatoes, tomatoes and, of course, chocolate.

In Modica the original chocolate making technique from the 16th century has been maintained much truer to original intents so you get chocolate that is made straight from the cacao beans, with no added cocoa butter or soy lecithin like modern conventional chocolate.

One step of the old traditional process required working the cocoa at low temperature never going over 40-45 degrees Celsius. This means that when sugar is added it gets mixed in but does not melt, thus giving the grainy texture this chocolate is famous for.

The two traditional flavors of Modica chocolate are vanilla and cinnamon, as well as hot chilli pepper (peperoncino). Today you can find all sorts of flavors, including nutmeg, white pepper, citrus, cardamom, sea salt, etc.
The best way to have it is melted in a hot creamy chocolate with milk or water, traditionally it was also eaten with a piece of bread or used in cooking to prepare savory dishes, now you can find it also turned into a magnificent gelato!

The loveSicily Cookery School is located right in the centre of the beautiful city of Modica - a Unesco World Heritage site in South-Eastern Sicily with a rich culinary tradition and wonderful baroque architecture.

The property has been restored to its original 1930s feel, when Katia's grandparents bought it, but the building dates back to the 17th century. It has an elegant living space and a spacious kitchen, both with domed ceilings and direct access to the terrace, which offers spectacular views of Modica's baroque San Giorgio Cathedral.

Please note that Modica develops up the slopes of a Valley and steps are hard to avoid. The school is located right in the centre of Modica, some 80 steps up from the 'corso' crossing the historical centre. If you feel that this may be a concern please get in touch for advice.  LINK

A vegetarian version of this menu is also available, just contact us via email for more info.

The cost of the chocolate-based three course lesson followed by lunch or dinner, with wine included is:

We run lessons for a minimum of two participants and a maximum of 10.

For a quote for a private class, please get in touch via the contact form.